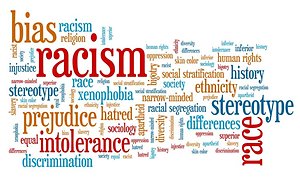 Oppression is a form of injustice that occurs where one social group is subordinated while another is privileged, and oppression is maintained by a variety of different mechanisms including social norms, stereotyping and institutional rules. A key feature of oppression is that it is perpetuated by and affects social groups.

[Oppression] occurs when a particular social group is unjustly subordinated, and where that subordination is not necessarily deliberate but instead results from a complex network of social restrictions, ranging from laws and institutions to implicit biases and stereotypes. In such cases, there may be no deliberate attempt to subordinate the relevant group, but the group is nonetheless unjustly subordinated by this network of social constraints. (Taylor; 2016; Groups & Oppression 520-536). 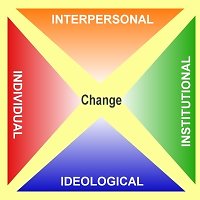 THE FOUR I's OF OPPRESSION

IDEOLOGICAL OPPRESSION
Any oppressive system has at its core the idea that one group (dominant group), is somehow better than another in some measure: More intelligent, harder working, stronger, more capable, more noble, more deserving, more advanced, chosen, normal or superior, therefore has the right to control other groups. The dominant group holds this idea about itself, and of course, the opposite qualities are attributed to the other group/s.


INSTITUTIONAL OR STRUCTURAL OPPRESSION
Belief that dominant groups have the right to control others becomes embedded in the institutions and structures of the society- the laws, the legal system & police practices, the education system & schools, job hiring policies, housing, media dialogue and images and political power. Institutional/structural oppression is reinforced when policies and practices maintain inequalities between privileged and less privileged groups. Social institutions/structures, replicate the ideological beliefs & make injustice normal, every day and expected.


INTERPERSONAL OPPRESSION
Gives permission & reinforcement for individual members of dominant social groups (eg. men, white, straight, affluent, able-bodied) to personally disrespect, mistreat, harass and exhibit microaggressions towards members of oppressed groups: the essence of hate based thinking or behaviour. For example interpersonal abuses from one person to another due to racism, sexism, homophobia, ageism, Islamophobia, classism, etc. This is the level that most people identify racism, sexism, homophobia etc. by reducing individual acts of bias or hatred, as identifying and demonstrating whether person X is 'a racist', or 'a sexist'. In reality acts of interpersonal oppression express the institutional/structural and ideological frameworks which underpin these interpersonal acts and processes.
The oppressed group does not have the social power to enforce its prejudices unlike the dominant group. To stress again, interpersonal oppression is built on the ideological & institutional/structural oppressions which legitimate and normalise these interpersonal abuses. Because interpersonal oppression arises from ideological and institutional/structural oppression, it is inaccurate to talk of say, 'reverse racism': because racism is based on ideology and institutional/structural practices supporting white supremacy. In the example given of racism, a black person may have and express prejudice to a white person but the black person lives within the global ideology of white supremacy. In a world promoting say, 'heavily melanised supremacy', for example, the social representations, expectations and entitlement to social power with respect to skin colour, would turn on its head what we view as normal or expected in the world we live in today.
It is important to recognise that we have to step-out of thinking within the 'black' 'white' binary and reframe ideological and therefore social power, as residing with the normalised institutional/structural laws, policies and practices created to support, in my example, 'highly melanised supremacy' over 'lightly melanised populations'. If we view high levels of melanin skin pigmentation as supremely dominant and desirable in society, then it would be European people avocating for their human rights from the heavily melanised countries such as those in Africa, in charge of them. It is interesting to think of the narratives that might legitimate 'melanin supremacy' in this alternative ideological world view.

PSYCHOTHERAPY, COUNSELLING, PSYCHOLOGY & PSYCHIATRY CLINICAL TRAINING & PRACTICE AT BEST ONLY CONSIDERS THE INTERPERSONAL AND INTERNAL LEVELS OF OPPRESSION; ALTHOUGH NOT NORMALLY DESCRIBED OR UNDERSTOOD IN THIS WAY. PSYCHOTHERAPY AND COUNSELLING PROFESSIONS DO NOT LOCATE INTERPERSONAL AND INTERNALISED OPPRESSION PHENOMENA WITHIN BROADER INSTITUTIONAL/STRUCTURAL AND IDEOLOGICAL SYSTEMS OF INJUSTICE. THIS IS WHY PARTICULARLY WITH A FOCUS ON COUNSELLING AND PSYCHOTHERAPY LITERATURE AND ACADEMIC RESEARCH, CRITICAL THEORETICAL APPROACHES EXPLORING THESE DYNAMICS HAVE NOT EMERGED. THIS RESULTS IN AN INDIVIDUALISTIC AND DEPOLITICISED APPROACH IN MY PROFESSION WHICH CAN ONLY BE DESCRIBED AS HARMFUL WITHIN TRAINING, CLINICAL PRACTICE AND RESEARCH. THIS FAILURE IS NOT NEW AND HAS BEEN CONSISTENTLY IDENTIFIED AS PROBLEMATIC WITHIN THE COUNSELLING AND PSYCHOTHERAPY. PROFESSION FOR DECADES.


INTERNALISED/INDIVIDUAL OPPRESSION
Internalised oppression can be either internalised privilege and entitlement. For example a male believing he has the right to dominate women. Most people in the dominant group are not conscious of their internalised privilege, they have internalised societies belief that they operate within on a daily basis. In contrast to internalised privilege is internalised criticism, judgement and hatred encountered by those groups judged by the dominant group as inferior. For example women believing they must be slim, or a Chinese person wanting double eyelid surgery, or a black person using skin lightening cream: to look and feel closer to the social ideal. Those members in less ideologically privileged groups are taught by society that they are inherently defective or flawed. Believing the ideological truths underlying self privilege or self hate can create ideologically based mental illness which informs and harms self image within populations .

Working at the ideological through to the individual internalised level of oppression as appropriate for the presenting issues offers a more holistic therapeutic alliance and relationship.

©2021 Olukemi Amala is powered by WebHealer
Cookies are set by this site. To decline them or find out more visit our cookie page